A returnee assisted to access the right to pension

A 71 years old, Roma returnee was born and raised in village Ranisht/Ranoc, Municipality of Klinë/Klina, married in Kaçanik/Kačanik, where she lived with her husband and five children, until they were forced to flee during conflict of 1999. While displaced, in North Macedonia, her husband passed away leaving her and their children to continue their refugee journey. 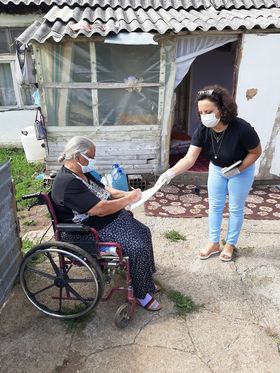 On 2017, with the support of UNHCR, her family managed to return to Kosovo, specifically in the Municipality of Gracanice/Gracanica. Among other difficulties regarding re-integration, obtaining personal documentation as a citizen of Kosovo was too long and complicated for her as a consequence of technical mistakes in her documents. Being so, she was not able to access her rights, such as her right to benefit from Pension Scheme.

On 2020, with the assistance of the UNHCR partner organization CRPK, she was equipped with personal documents, where she is given the opportunity to apply for pension as an elderly person. The difficulties such as lack of a permanent address, lack of knowledge on accessing services and rights and the situation created due to Global pandemic, continued to hinder the process of collecting relevant documentation and applying for pension. Advancing Together (AT), UNHCR partner organization, received her request and managed to regulate relevant documentation, apply for her in Prishtinë/Pristina Regional Pension Office, and obtained positive decision which recognizes her rights to Basic Pension.